Editor’s Note: When I first spoke to Matt Piepenburg of Signals Matter (http://signalsmatter.com), it was immediately clear we were on the same page: Banks are still misbehaving, treating the markets like their own private casinos – despite all the touted post-crisis “reforms.” They’re putting individual investors like us at a grave risk. With markets plunging, we may already be paying the price for their stupidity. Here’s Matt…

Investors are being targeted by an all-out media blitz. But it’s a funny kind of blitz – none of the violence you’d normally associate with the word. There’s a reason for that, as we’ll see.

Try this: Think of the last time you read, heard, or saw something about “exploding earnings,” “synchronized global growth,” or “record levels of consumer confidence.”

I’ll bet it wasn’t long ago at all. In fact, I’ll go so far as to say you probably read words to that effect today.

So why is the mainstream media going out of its way to spread… calm and tranquility?

I’ll show you the answer in a minute, when we dive into what I can only call a “masterpiece of misinformation” from a trusted American news organization.

You Need to Be In It for Them to Win It

Markets are empirically crazy, and at ever-increasing stages of risk by every traditional metric, from the CAPE indicator to fake accounting, and “massaged,” (which is to say dishonest) earnings and profit reports.

Did You Miss It? Former Speaker John Boehner just joined the cannabis industry’s biggest players to cover everything you need to know about America’s next unstoppable economic revolution. Watch the rebroadcast…

After all, the entire financial industry of wealth managers and bankers, retail investment advisory (RIA) shops and their bubblehead salesmen rely on one thing in particular…

Keeping clients fully or near-fully invested at all times.

Remember, the “experts” and advisers get paid by assets under management; there are no prizes for straight talk or truth-telling. Mutual fund reps and exchange-traded fund (ETF) peddlers also need money to keep coming in, not going out to safety.

You’re just not going to hear bank presidents and private wealth managers warning their clients to leave a market that gets more dangerous by the day. That would be akin to the stores on Fifth Avenue posting signs on their doors saying “GO AWAY! You’re getting robbed here!”

If it has a screen you can turn on, if you can open it up and read it, there’s the blitz. It’s everywhere, lest I be accused of singling out a source – but let’s take a look at one particularly egregious example from Bloomberg.

Look at a recent article posted on the 10-year anniversary of the Lehman collapse by Yalman Onaran.

In this mixed example of “be calm, carry on,” Onaran presents all kinds of math-based data and charts to suggest the U.S. banking sector today is much safer than it was when monsters like Lehman Bros. and Bear Sterns walked the prehistoric canals of Wall Street circa 2008.

What’s fascinating about this article, however, is that the very evidence and data Onaran employs to make his case, if looked at even for more than a second, actually defeats his case.

As I see it, it’s a remarkably (and unintentionally) odd piece of misinformation…

So let’s dig into the data, shall we?

Onaran begins with some soothing tones, that banks, “on many counts,” are safer than before the last crisis.

Well, for one thing, Onaran consoles us with the “fact” that there has been “a sharp increase” in the capital requirements imposed on banks to make sure they have enough money to “buffer” them from another “Lehman moment.”

In the past, for example, many banks had only $2.00 for every $100 of “assets” in their “cushion accounts,” and thus when bank assets were wiped out in market downturns, banks were caught swimming naked at low tide.

As Onaran tells us, today, banks have $7.00 in their “buffer accounts” for every $100 they roll the dice with in the market casino. He even provides a nice little graph to make you feel even safer…

Folks, does that feel, look, or seem like a “cushion” to you?

But just to make you feel even safer, Onaran quotes Danile Tarullo, who recently oversaw financial regulation at the U.S. Federal Reserve.

“The resiliency of the biggest banks is pretty high right now… It would be good for them to have a bit more capital and be even more resilient, but what we’ve got right now, if preserved, is pretty good.”

Now, those of us who have been around the block a few times know that the Federal Reserve itself is the ticking time bomb under this current market bubble.

And it has to be said that the Fed, this bastion of yes-saying “economists” with precisely zero trading experience, has the worst forecasting record in the entire history of 20th century market crashes.

So citing Tarullo as an objective or even valid source on the subject of market stability is akin to quoting Dr. Seuss in your cancer research.

Still, the “bliss blitz” rolls on…

These Banks Are Still Big Enough to Be Dangerous

Onaran’s next observation is that those brave bank regulators have done a terrific job of constraining bank growth.

After all, it was those selfsame banks that killed the markets in 2008 (just before they were richly rewarded for their manifest sins with trillions in taxpayer bailouts and record-breaking bonuses, of course).

Special Rebroadcast: John Boehner just revealed why he’s going ALL-IN on marijuana… and exactly how ordinary Americans can make a fortune from this hundred-billion-dollar industry. Click here to watch…

Onaran’s evidence for this much-needed bank growth regulation? Well, his exact words: “… even JPMorgan Chase & Co. and Bank of America Corp. are smaller than they were in 2007.”

Ah… Such profundity. Such wise reporting. Such comfort… kind of like saying Jeffrey Dahmer was safer in 1991 than he was in 1980 because his kill ratio was lower by one decapitation in 1991.

In a remarkable piece of blatant trickery and whistling past the graveyard of reality, Onaran claims “banks are shrinking” by reporting that the ratio of bank assets-to-GDP in places like Bank of America Corp. (NYSE: BAC) and Citigroup Inc. (NYSE: C) have “shrunk” from their 2007 percentages of 14% to 11% today.

Can anyone call that a “safe change”? Onaran: Are you serious?

But not to worry, Onaran gives us a pretty graph (with more exaggerated slope lines) to make his “report” look very calming… 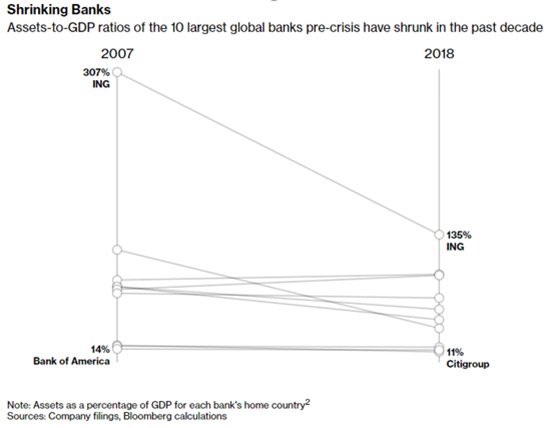 Again, all of you have the same common sense as I do. This “calming data” from Bloomberg is like a frat boy saying “I’m doing much better today: Only 12 beers for lunch as opposed to my typical 20.”

There’s another little “trick” Onaran employs in his reportage.

These “shrinking” ratios of assets to GDP ignore the fact that actual GDP today is lower than it was in ’07, which further distorts his already weak puff piece as to U.S. banks.

The simple fact is this: Nothing fundamental has changed in these banks since 2008. They are as bloated and dangerous as ever. Period.

The Big Banks Are Still Addicted to Short-Term Funding

Once again, Onaran puts his own graphical feet in his mouth – deep, it seems to me.

Here, he makes another calming, but entirely shallow claim, that banks are safer because they’ve reduced their reliance on short-term funding, which is to (quite incorrectly) say they employ less of the kind of trading leverage that leads to market crashes.

Prospering During a Financial Crisis: Incredible wealth-building opportunity for those who are prepared – quickly amass a potential $1.5 million retirement nest egg. Learn more…

To make his misleading point, Onaran provides data that the big banks, as a group, have reduced their short-term debts (re-purchase agreements) from 44% in 2007 to 24% today.

And once again, he calms our fears with another pretty graph: 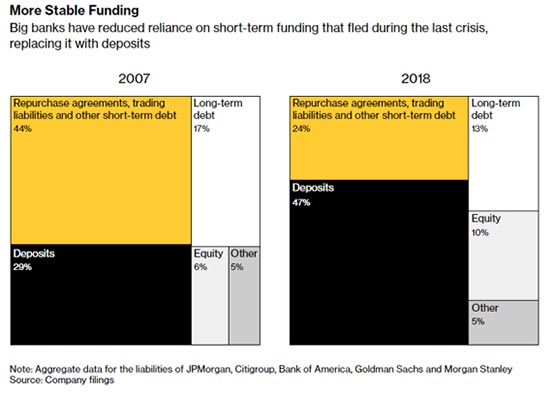 Folks, when markets correct, as markets always do, these “more stable” funding “improvements” are paper tigers.

My colleague and I come from these banks. Nothing – and I mean nothing – about these “improved” numbers would make an ounce of difference in surviving a market crisis.

No Matter What, There’s No Escaping the Big Picture

In addition, Onaran fails to place any of this “improving” bank data into the current macro context.

The fact is, our national, corporate, and private debt levels are massively higher today than they were on the eve of the last crisis in 2008.

Stated simply: The debt powder keg today is infinitely more dangerous than it was on the eve of even the ’08 disaster.

When bank assets fall in the next correction, the speed, depth, and power of the deluge of losses will pour over these minor “funding improvements” like a hurricane surge over sandbags.

By point of fact, rather than opinion: Banks are not fundamentally safer today than they were in pre-crisis 2007.

And that means none of us are safe.

The Foxes Are Still Guarding the Henhouse

The bankers, in essence, are regulating themselves, after learning nothing from the disaster they precipitated in 2008.

As Phil Angelides, chair of the official Congressional Financial Crisis Inquiry Commission cryptically put it: “This is not an industry that has examined itself and remade itself in the wake of the crisis.”

Just consider these names, the of “bank regulators” who came in post-2008 to “clean up” the banking mess:

All of us, when reading “market reports” like this latest Bloomberg piece, need to think about facts, context, and biases – including our own.

Individual investors, retirement savers, taxpayers, and citizens all deserve better than the relentless spin of the “bliss blitz.” It’s we who stand to take the biggest, cruelest hits when the banks – and bankers – who are virtually up to their eyeballs in moral hazard bust out, and crash the casino markets.

The stock market crash of 2008 is nothing in comparison to the maelstrom that’s brewing now – 2018 will be the year of the greatest economic crisis of the century.

Jobs will suffer, the housing market will spiral downward, and millions of American seniors will face bankruptcy.

But if you know how to prepare, you’ll be one of the few lucky ones.