Investors already know how important the dollar is to gold prices, and this last week proved just how true that is.

As the greenback soared while stocks struggled, the price of gold fell about $20 per ounce.

But that turned out to be little more than a short-lived Halloween scare as gold quickly bounced to recoup those losses and more.

Looking back on October, the S&P 500 lost about 11.5% from its peak while the Nasdaq retreated as much as 14.9%. It was a really tough month for the stock market.

Meanwhile, gold prices and gold stocks gained about 3% last month. Goldman Sachs analysts recently said, “In our view, it represents a rebound in fear-related demand for gold with ETFs beginning to build after several months of declines.”

Though the stock market can continue higher for some time, investors are realizing this bull market is closer to its end just as inflation is starting to pick up.

Why the Dollar Weighed on Gold Prices

Monday (Oct. 29) saw an ugly reversal in the Dow. Triple-digit losses mounted as investors worried about a possible peak in earnings and economic fallout from tariffs.

But U.S. President Donald Trump suggested on Tuesday (Oct. 30) that a possible trade deal with China could soon emerge. Weaker-than-expected eurozone GDP, higher-than-expected German inflation, and Merkel’s announced departure in 2021 all weighed on the euro, boosting the dollar.

The DXY rallied to end the day at 97, a level not seen since June last year. Clearly, that weighed on gold, but amazingly, the price of gold still managed to close at $1,223.

Wednesday (Oct. 31) saw an intraday high of 97.18 for the DXY as stocks rallied back. As a result, gold saw an intraday low around $1,212 but then reversed and followed both the dollar and stocks higher, closing at $1,217.

Selling in the dollar returned in force on Thursday (Nov. 1) as the DXY shaved off about 80 basis points from the previous close. U.S. weekly jobless claims fell and the ISM Manufacturing Index missed expectations, causing investors to consider a possible pause in rate hikes, hurting the dollar. Gold had a great day, finishing $19 higher at $1,232.

Take a look at the DXY’s build during the week, before collapsing on Thursday… 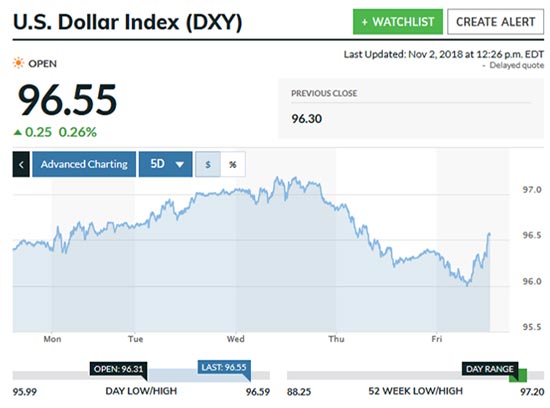 On Friday (Nov. 2), U.S. equities sold off from a higher open as fear returned to markets and investors looked to the uncertainty of upcoming midterm elections. The 10-year yield had managed a climb back to 3.2%. Gold held steady, trading flat at $1,232 by late afternoon heading into midterm elections week.

Even though I would have liked to seen gold prices climb higher over the last week, with the volatility in stocks and the DXY, it’s still a great sign that gold held its own.

But this week raised a lot of new questions too. Has dollar buying peaked? Will gold continue to act as a safe haven? And will gold stocks benefit from the volatility?

I’ll answer those and more, including my latest gold price prediction…

Where Gold Prices Are Heading Next in 2018

The DXY had another strong run-up, peaking higher just north of 97, above its last high near 96.7 in mid-August. But if you take a look at the relative strength index (RSI), which just rolled over 70, it could be a sign the dollar has peaked ahead of the midterm election.

Plus, if Trump does pull off some sort of trade pact with China soon, that could deflate the dollar too, making U.S. exports cheaper and countering recent yuan devaluation.

Take a look at the dollar’s trend, especially its RSI… 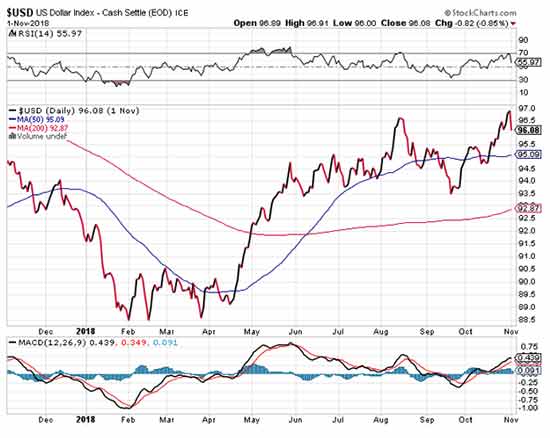 Gold’s dip in the past week was quickly reversed, pulling the metal right back up to its prior trading range. This last pullback may have also helped to establish a new higher low, which would be bullish price action.

As well, we can see a clear upward slope to the highs being set since gold broke out in early October. What’s more, the 50-day moving average appears to have bottomed and started to trend higher. Incidentally, that’s where the recent pullback found support and turned back higher.

You can see that pattern emerge here… 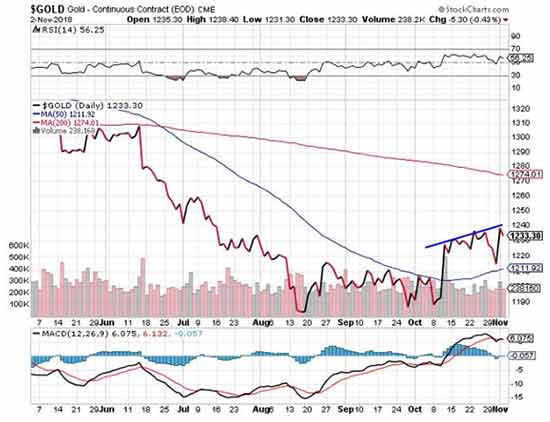 This is a seasonally strong period for gold, all the way through to end February, with a likely pause from mid- to late December. If gold acts like it has most up years since 2001, we could well see it gain as much as 10% to reach $1,330 by late February.

As for gold stocks, they too sold off in late October but haven’t quite recuperated the way gold has.

The VanEck Gold Miners ETF (NYSEARCA: GDX) has a clear ceiling at $20, which it needs to clear. That should lead the way toward a strong rally up to $22.50. Meanwhile, the RSI and moving average convergence divergence have both recently turned higher, while the 50-day moving average also looks to have bottomed… 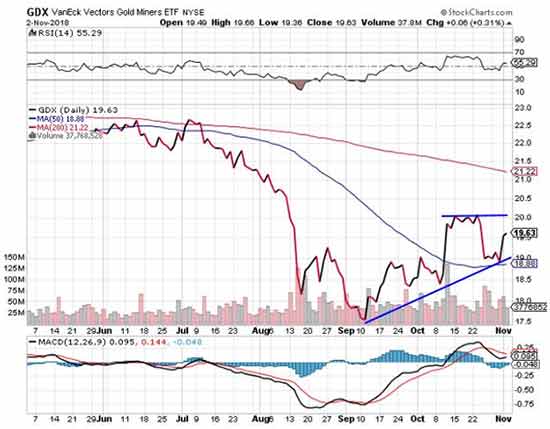 Once the midterms are behind us, we could get renewed dollar weakness. Stocks may resume their climb, which could compete with gold. But I think the metal’s seasonal strength this time of year will overcome that and pull gold higher for the next several months.

This extraordinary money-doubling strategy has the power to profoundly impact your financial future.

You don’t need any special training… any insider knowledge of the markets… or any exceptional skills.

In fact, all you need is a computer or smartphone and just 10 minutes of “work” to potentially put $1 million in your bank account faster and easier than you ever dreamed.