The price of silver has been steady over the past week and is still up tremendously since late December. In fact, silver prices are still up more than 9% from their December low.

At this point, a small pause in silver’s rise would not surprise me. The metal typically takes a little time to digest its massive gains.

In the past two weeks alone, silver is up an astounding 6.3%, while gold is up 1.6%. That provides silver investors with nearly four times leverage over the gold price.

The dollar’s decline has certainly helped, supported by the persistent wild swings in stocks.

In my view, stocks could recover despite growing volatility, and that along with economic uncertainty and a possibly dovish Fed should underpin silver. I think the grey metal is in for a strong rebound year as investors look increasingly for viable asset allocation alternatives.

The recent sharp rally in Treasuries in response to the dramatic stock sell-off also shows investors have sought shelter. Interestingly, silver has also risen along with bonds as safe havens have become increasingly attractive.

Here’s where the price of silver heads from here…

I think silver has moved into a near-term consolidation mode.

How to Profit Off This $11.1 Billion Money Pool: By following a few simple steps, one IRS directive could help set you up to receive checks of up to $1,795 every single month thanks to a genius investment. Learn more…

It has since dialed back slightly, even as the DXY has continued to weaken.

For its part, the DXY recently peaked on Wednesday, Jan. 2, at 96.94, unable to reach the 97 level. Since then, it has trended steadily downward.

Here’s a look at the DXY over the past five trading days: 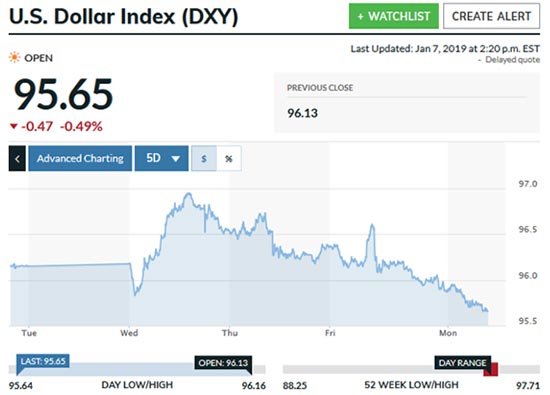 These are levels in the index not seen since late October. 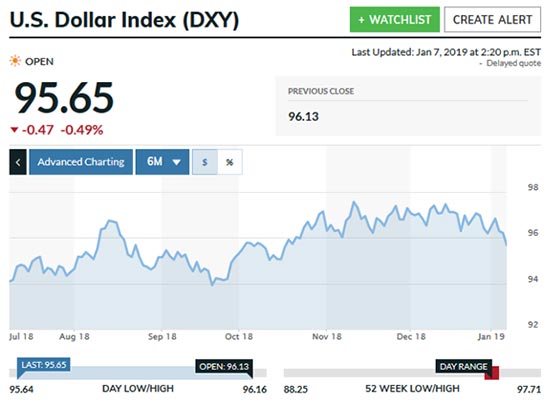 So it’s no surprise that such negative momentum in the dollar has helped silver reach new highs not seen since July.

As stocks appear to stabilize and potentially start to claw back on their recent losses, the weaker dollar just might prove a strong footing for silver downside.

Here’s My Newest Price Target for Silver in 2019

It’s not rocket science to conclude that the dollar’s been facing challenges of late, not the least of which is the Fed’s new “patient” approach to future rate hikes.

There’s no doubt the recent dramatic correction in stock indexes has made Powell’s position more tentative. What that sell-off has also done is cause investors to stampede into Treasuries. 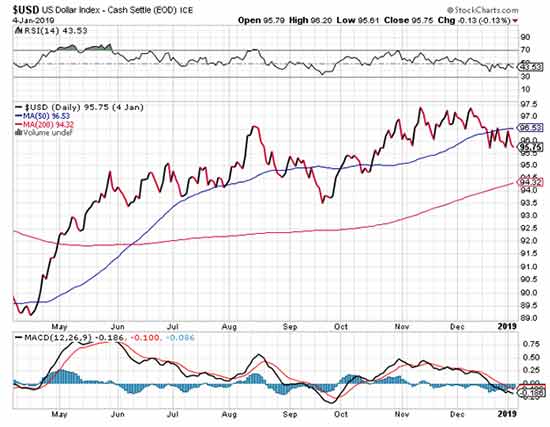 And that stampede has caused yields to drop, signaling that the Fed was likely to ease up on its rate hiking calendar.

That’s exacerbated the dollar’s weakness, which is great for precious metals.

We can see the commensurate jump in silver prices, especially since early December, when the DXY was last above 97. 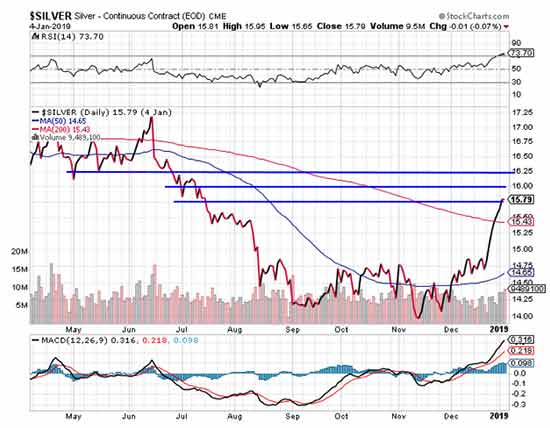 With silver having dropped back to $15.60 from its high last week at $15.75, I believe we’ll see the metal continue to digest its recent gains.

But these amounts are small when compared to Indian imports.

Ever the bargain hunters, Indians imported a massive 1,032 tons of silver in October. This number was up 62% over the 637 tons they imported in 2017.

That was a 33-month high as Indians scooped up silver at bargain prices around $14.50 per ounce. In order to satisfy the nation’s ambitious solar power energy demands and electronics manufacturing, along with retail demand for silver jewelry and silverware, India has become the top silver-consuming nation.

Keep in mind too that we’re in January, the strongest month for silver, with an average of some 2.6% gains typically. As well, this is the strongest seasonal period for silver returns, which runs through to the end of February.

So really, considerable further upside strength in silver shouldn’t come as a surprise.