Silver is a particular kind of precious metal.

Unlike gold, nearly 60% of silver demand comes from industry. That’s because silver has great physical properties, while being much cheaper per ounce than gold.

Often referred to as the “poor man’s gold,” silver has outstanding characteristics that make it valuable, and even indispensable, to industry and beyond.

Silver is crucial to electronics and the solar industry, and new applications are being discovered on an almost daily basis. Constant innovation is leading to new uses for silver like water purification and anti-bacterial application.

And all of this has been happening as mine supply has been falling, likely having peaked back in 2015.

While the jewelry and industrial sectors have been more predictable, it’s the demand for silver from the investment sector, in the form of bars and coins, that’s the wild card.

I think 2019 could be a stellar year for silver prices as a confluence of catalysts come together.

That could ignite a strong rally as the silver price remains very cheap on both a nominal and relative basis.

With climbing inflation, a potential surprise on the higher side could spark a flurry of buying in precious metals. And silver’s extreme weakness relative to gold prices suggests a reversion to the mean is in the metal’s future.

Let’s start by looking at the likely drivers for silver prices in 2019, and then I’ll follow on with my forecast for the new year.

These Catalysts Will Drive Silver Prices Higher in 2019

The gold-to-silver ratio is a great tool for comparing silver prices relative to gold prices over the long term.

We simply divide the gold price by the silver price, which tells us how many silver ounces are needed to buy one gold ounce.

“Federal Rent Checks”: Thanks to an obscure law, over 100 government agencies are required to pay rent. By following a simple investment strategy, you could receive checks of up to $1,795 every month. Read more…

This ratio gets really interesting when it reaches extreme levels. And by all accounts, that’s the case right now.

The following chart illustrates the gold-to-silver ratio going back to 2,000, near when the current precious metals bull market began. 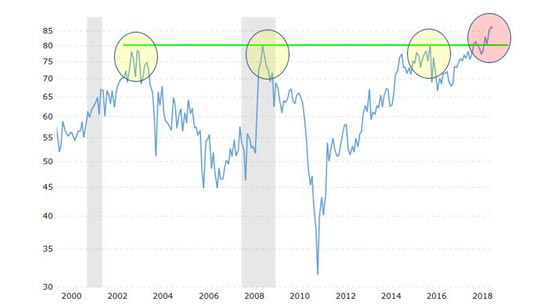 Following the 2003 ratio decline, silver prices soared 61% over the next nine months. The 2008 ratio reversion boosted silver by a whopping 128% in just 11 months. And the 2016 ratio correction helped silver rally 28% in as little as four months.

Now look at the red circle in the chart. That’s where the ratio stands now, at 85. That means silver is even cheaper relative to gold than at any time since 2003. It’s at its highest level in 20 years.

I expect we’ll see a big reversion in the gold-to-silver ratio, likely down to around 65.

And that’s just one catalyst for silver prices in 2019…

Another factor that’s bullish for silver is rising inflation.

There’s a multitude of gauges to measure inflation, and many of us – perhaps rightly so – would disagree with official inflation numbers. If anything, many would argue they understate true inflation levels.

Still, one of the most widely tracked measures is the U.S. Bureau of Labor Statistics’ Annual Inflation Rate.

Although it’s been relatively tame, the rate has pushed above 2.5% twice since 2016 and has been trending higher generally, even as the Fed’s been raising rates.

The other measure is the Consumer Price Index, which has managed to climb relatively steadily ever since 2009, with a couple brief pauses in between.

Rising prices are likely to continue to draw investors toward precious metals – and silver in particular, as it remains severely undervalued.

Here’s How the Fed Could Move Silver Prices in 2019

In fact, precious metals tend to perform the best as we near the end of a rate-hiking cycle.

Despite decent odds for a few more rate hikes, the latest message being telegraphed by the Fed is it is nearing a neutral stance on rates.

That’s more dovish than it had been just a couple of months ago, and it’s brought into question the likeliness of up to four hikes next year, which the market’s been assuming for some time.

Because of this and other factors, some analysts (myself included) believe the U.S. dollar may have peaked and will face considerable headwinds next year.

Jeff Gundlach, CIO at DoubleLine Capital with $123 billion under management, has made several prescient bond calls in the past several years. Just recently, Gundlach said the bond market is telling us that the Fed’s unlikely to tighten in 2019 or 2020.

Dutch bank ING also says the dollar is close to peaking, thanks to the swelling U.S. twin deficit – the current account balance and the government budget balance. Trillion-dollar deficits are expected over the next four years.

And Bloomberg Intelligence’s commodity strategist, Mike McGlone, recently said the “trade-weighted broad dollar is near a peak and silver a bottom… and the potential for mean reversion should outweigh continuing-the-trend risks. Silver, among the most negatively correlated to the dollar and positively to industrial metals, appears ready for a potential longer-term recovery.”

A falling dollar tends to be good for silver, as it then takes more dollars to buy the same ounce, hence a rise in price.

And while this is all happening, mines across the world are also producing less silver…

Silver Production Is Falling, and That’s Great for Silver Prices

Several nations produce silver, but none produce as much as Mexico does.

Until recently, Mexican silver output has been projected to grow. But with the newly elected government, the situation could change quickly.

You see, they’ve threatened changes to mining laws that could severely punish mining companies under certain circumstances. One proposal suggests the ability for the government to expropriate entire mines if a spill occurs, leading to environmental damage and health risks.

Another proposal would give the economic minister the ability to block exploration in places where doing so might lead to social conflict.

Just proposing such laws could dramatically curb mining investment in Mexico, as companies weigh the risks of doing business there against those in other (perhaps more inviting) jurisdictions.

This could lead to declining mining output and, by extension, less silver coming from Mexico in future years.

The Supply “Problem” May Only Get Bigger in 2019

Consider too that only one of every three silver ounces mined actually comes from a primary silver mine. The rest is by-product, nearly an afterthought, of the production of other metals.

Just 30% of silver comes from primary silver mines. Copper mining contributes 22% of silver output, while zinc and lead generate 34% of the silver mined annually. The producers of these other metals see silver as little more than a “bonus.” 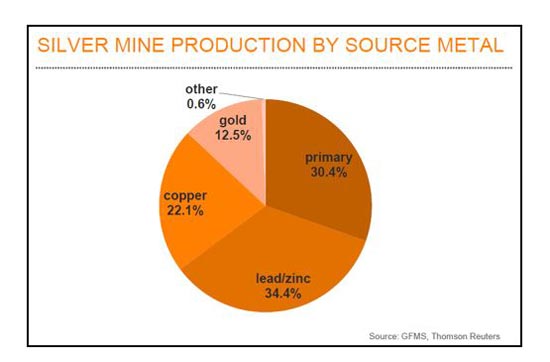 So even when silver prices rise dramatically, supply may simply not respond as those producers gain little benefit and are already limited by existing production capacities. And that could help fuel even higher prices as demand dramatically outpaces supply.

And the prices of those other metals – like copper, zinc, and lead – have struggled of late. 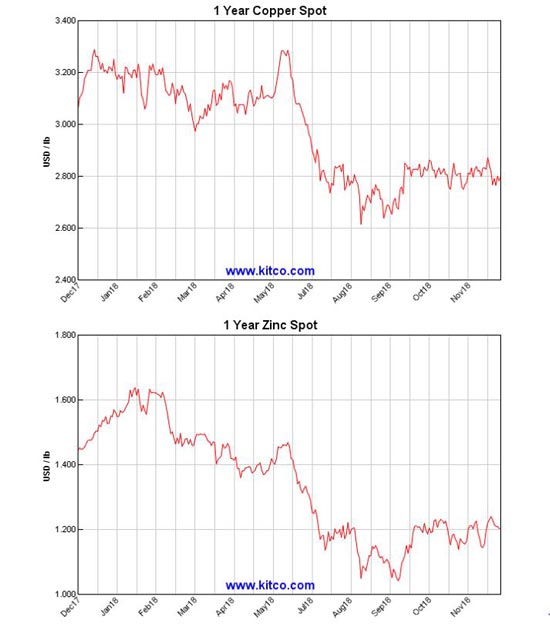 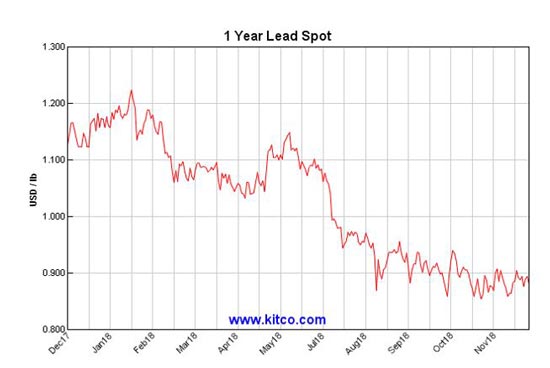 When metals prices fall like this, mining executives become hesitant. They think of the effect on their bottom line as profits shrink. They may look to curb production or even chop expansion plans. And that inevitably contributes to fewer ounces of by-product silver.

Now that I’ve shown you all the factors that will drive prices higher, here’s my exact silver price prediction for 2019…

My Exact Silver Price Prediction for 2019, Including My New Target Price

So we have all the ingredients for a big rally in silver in 2019.

Now let’s look at just how high silver might go. 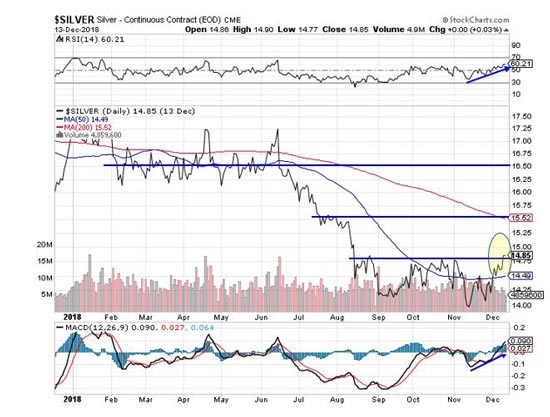 Despite a challenging year, silver looks like it may be finally breaking out, especially since its November low.

That rise has been accompanied by plenty of upward momentum, as indicated by the rising relative strength index and moving average convergence divergence indicators.

Given that silver has enjoyed a strong seasonal period from December into March for each of the last three years, I think we’re going to see the same again in 2019. And that could easily pull silver up to the middle of its range during the first half of 2018. So I think silver could rally to $16.50 in Q1 of 2019. 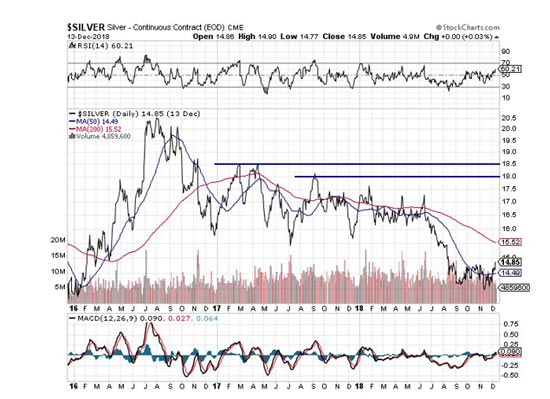 By the second half of next year, with bullish fundamentals and technicals in place, I think silver could push higher still.

But ultimately, given how undervalued silver is to gold through the lens of the gold-to-silver ratio, I think silver will go even higher than $18.50.

With all the positive drivers for silver next year, I think this multipurpose metal could outperform gold and most other metals with ease.

The stock market crash of 2008 is nothing in comparison to the maelstrom that’s brewing now – 2018 will be the year of the greatest economic crisis of the century.

Jobs will suffer, the housing market will spiral downward, and millions of American seniors will face bankruptcy.

But if you know how to prepare, you’ll be one of the few lucky ones.