The Wall Street–captured financial “news” media blasted us with the usual misinformation in the wake of last Friday’s nonfarm payrolls report. The big guns of financial infomercialism touted the notion that the reported gain of 155,000 jobs in November “missed” economists’ expectations. The consensus guesstimate was for a gain of 198,000.

Here’s how a CNBC headline put it: “Job growth falls short of expectations in November: 155,000 payrolls created vs 198,000 estimate.”

“Markets have high expectations for a December rate hike, but a slowdown in hiring in November appears to give Fed officials some room to slow down their hiking path next year,” the outlet reported.

In the meantime, we can look at the actual data right now, make a few comparisons with years past, draw a few lines, and see reality as it currently exists without waiting five years for the seasonal adjustment process to be completed. Of course, that was the seasonally “adjusted” number, which as often as not bears no resemblance to what actually happened. The seasonally fudged number is subject to two monthly revisions, and five annual revisions thereafter as the statisticians fit the abstraction to reality over the next five years.

So let’s do that and see what actually happened in November – and what it tells us about the stock market.

While the media kept everyone focused on the seasonally adjusted gibberish, the actual, unmanipulated data gave us a clear view of November’s performance. The total number of jobs rose by 475,000. That’s as of Nov. 12, by the way. It’s not the full month. We have subsequent real-time tax data showing that the job market has strengthened considerably since then. I’ll get to that in a moment.

The Number Didn’t Miss – the Economists Did

The problem wasn’t that the number “missed.” The problem was either that the seasonal adjustment factor was wrong and will be adjusted away in the next few years as new factors are applied retroactively, or it that economists were even more clueless than usual. I heard in one report that not a single economist surveyed had guessed that low. That tells you something.

The fact was the month’s actual performance didn’t miss anything. It was well above average. All of the hand-wringing and worry about the number being weaker than expected was pure nonsense.

When we graph the actual data, you can see that absolutely nothing has changed.

This trend has been running on railroad tracks in virtually a straight line since 2011. It could hardly be more regular. The annual growth rate was 1.65% in November. That was solidly in the middle of the range of the past two years. It was slightly slower than the growth since June, but still in an uptrend.

A weak December could break the trend, but how likely is that? Not very, if the withholding tax collections from late November and early December are any indication. There was a huge surge in withholding from mid-November through the first couple of days in December. It could be an anomaly, but it certainly suggests that at least some component of that gain was due to a hiring surge.

Don’t Buy the Hopium; Wage Inflation Is Raging Too

So if you’re thinking about buying into the Wall Street hopium that there’s something in the employment data that would get the Fed to back off on its policy of draining money from the banking system, think again. In terms of the jobs trend, nothing has changed that would cause the Fed to do that.

On the wage inflation front, the report said that the average hourly wage gained 0.2% in November and was up 3.1% for the year. That’s healthy inflation, well above the Fed’s 2% target. So even on the face of the reported seasonally adjusted data, there’s no basis for expecting the Fed to ease off.

On an actual, not seasonally adjusted basis, hourly wages rose by 0.2%. Evidence of seasonality in wages is sketchy, but there’s clearly a pattern of up one month and down the next. Even with that, the trend is unmistakable. It’s up, up, and away! In fact, since the Fed established its 2% inflation target in 2012, average annual wage inflation has NEVER been below 2%. The idea that there’s been no wage inflation is just a sham, plain and simple. This will push core CPI higher as well. 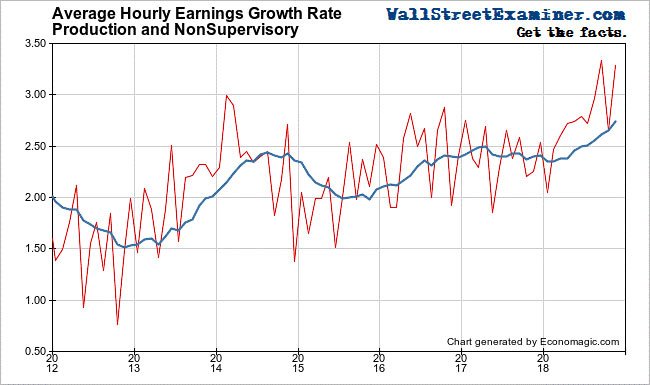 The annual wage inflation rate is now 3.3%, not 3.1%, as the media reported on a seasonally adjusted basis. When comparing the same month each year, there’s no seasonal factor.

There’s no basis here for expecting the Fed to begin to ease policy. The annual inflation rate was 3% or higher in August, September, and November. The average wage inflation rate for the past 12 months is now 2.7%, and it is accelerating. At the same time, the Fed has pegged the Fed Funds rate at 2.25% for now. The Fed is BEHIND THE CURVE!

Stay on the Sidelines, and If You Are Trading, Harvest Put Profits Regularly

Remember that the Wall Street publicity machine will do everything in its power to keep you from selling stocks. It will always promote a rationale for the idea that “things will get better any day now.” Every time there’s a wave of selling, the Street will tell you not to panic. Stocks always go up, they say. But panic is the deer freezing in the headlights as the car speeds out of the darkness toward a collision with the frightened animal.

If you followed my advice to reduce your exposure to near zero over the past year, you are standing out of harm’s way on the roadside, holding cash in the form of T-bills at ever-rising rates. Maybe it’s not the best feeling to watch a herd of deer frozen in the headlights as a Mack truck careens toward it, but being on the side of the road beats being in the herd with that truck bearing down.

For now, be patient about putting on new trading positions to profit from the market’s decline. If you’re holding short-term SPY puts, with the market testing support, you can take half that position off the table while letting the other half ride.

Starting Today, You Could Capture over $15,000 in Weekly Profits

We just unveiled a trading phenomenon that can deliver daily trade recommendations with unbeatable money-doubling potential.

You can make these simple plays in less than five minutes, straight from your phone or computer, from anywhere in the world.

And in a few minutes, you could change the course of your financial future forever.

The post Despite What Wall Street Tells You, Actual Jobs Data Gives Fed No Reason To Slow Tightening appeared first on Lee Adler’s Sure Money.