Tax collections fell again in September, but the Congressional “Budget Busting Agreement” has spending soaring right into the face of plunging federal revenue.

And I’m here to tell you this: The fall in tax collections is a big factor driving shares and bond prices down.

There may very well be some earnings- or news-driven rallies from here on out, but over the long term, there’s simply not enough liquidity left in the markets for them to go anywhere but down.

It’s simple home economics: If you have no cash to spend, you either go without or, more likely in this day and age, go into hock to get the things you want or need, whether that’s a new dishwasher or car, say, or a Space Force or a gigantic WWI-style military parade.

The government’s no different.

In Case You Missed It: Former Speaker of the House John Boehner was once marijuana’s biggest enemy… now he’s advising Americans to go “ALL IN” on cannabis. To see his shocking prediction, click here…

For years after the crisis, with the Fed using QE to buy all the new debt at a cost of virtually zero to the U.S. government, the stock and bond markets could sail merrily along. With the Fed doing QE, we saw slow economic growth and gravity-defying concurrent bull runs in stocks and bonds.

But reality is annoyingly persistent. It’s hard, in a market where the Fed has pulled the plug, for investors to buy enough of the new Treasury issuance so that the price of both is supported. And it’s even harder because the Fed is now actually pulling money out of the system.

So Treasury supply will continue to hammer away at the markets.

Before this month, it had been showing up in soaring short-term Treasury bill rates and intermediate-term yields. I predicted that would become a problem for stocks, and we’ve begun to see that in October.

We can see the effects of the tax cuts in monthly total federal revenue since the tax law was implemented in February.

April was an exception. That was a one-time event that happened because of windfall individual taxes from capital gains taxes accrued in the February wave of stock market selling.

September collections seemed to improve. The decline was smaller than the prior four months. But the improvement came from miscellaneous revenue, and counter-stimulative tariffs – not taxes.  Adjusting for those oddities, the revenue decline would have been around 4.3%. 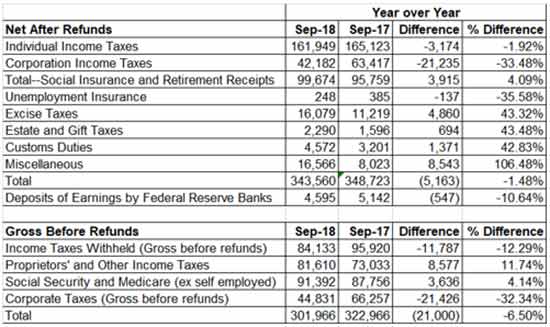 Gross withholding taxes fell $11.8 billion or 12.3% year to year. The last month before the tax cuts took effect was January. Comparing the annual rate of change for September with the January figure gives us an idea of the impact of the tax cut.

To “keep the good times rolling,” that money must be raised from the market via Treasury debt issuance. That’s on top of an already existing structural deficit.

What do we see there?

Well, March had a year-to-year decline of $7.2 billion, or 5.2% in gross withholding. September was 7% worse than March! That would indicate that the economy is in a DEPRESSION!

I’ll assume… for now… that’s an anomaly: cause unknown.

The 4% nominal gain comes on the heels of a similar gain in August, a 2.8% gain in July, and 2.2% in June. Therefore, this series suggests some growth.

But the Bureau of Labor Statistics has been reporting surging wage and salary inflation in recent months. If there is any real growth, we’re talking by razor-thin margins.

Overall, the income tax data is conflicting. But we can draw one inescapable conclusion…

At best, this looks like a continuation of the “slow growth” story. It’s not enough to compel the Fed to stop tightening, so for the central bank, it’s full speed ahead; the liquidity drain will continue.

Quarterly corporate income taxes were paid in September. They continued their own collapse, thanks to the gift the corporations got from the Trump regime.

The argument, as always, was that this would provide “economic stimulus.” And in fact, real business investment has been booming. But it started to boom when the stock market broke out in 2016, and it has followed that curve.

That’s the driver, not the tax cuts. 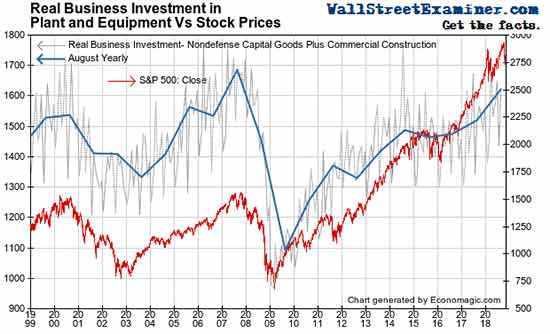 This harkens back to a point I have harped on before. Businesspeople take their cues from the stock market. When stocks collapse, both real investment and the broader economy follow.

Contributing to the coming stock market collapse is that the tax cut has sharply cut revenue.

Buy These as the Decline Accelerates

I don’t think we’ll see any outbreak of extreme fiscal sobriety and rectitude in D.C. Rather, we should expect the government to continue to borrow increasing sums of money via increased Treasury issuance.

With the Fed tightening, pulling billions out of the market every month, the new supply of Treasury debt cannot be digested by the market without something being liquidated.

That something is stocks and bonds. I don’t think being long there is a good idea right now; buying puts on the broad market is.

Folks who held on until at least yesterday have been enjoying a lucrative ride – the S&P 500 is under 2,716, and that put has been soaring.

I think buying SPY puts, about four weeks out from expiration, at or near the money, is still the smartest, safest move to make right now. These can be repeatedly rolled over as the market declines. Keep your eye on the S&P 500, with a “mental stop” at 2,750. Sell the puts above that level – or re-buy and hold below that level.

John Boehner Just Revealed Why He’s Going ALL IN on Marijuana (Did You Miss It?)

Former Speaker of the House John Boehner – once the cannabis industry’s most staunch opponent – just revealed an UNCENSORED prediction about America’s most controversial, misunderstood, and what’s quickly becoming our most lucrative industry. If you missed seeing this historic announcement live, go here for a special rebroadcast.