The price of silver managed to hold onto recent gains this week, despite renewed dollar strength.

Volatility has been soaring as the market’s been thrashing around, with the S&P 500 down another 5% in the last five trading days.

We also know from the latest Commitment of Traders reports that money managers have been covering their short silver futures positions, especially in the wake of silver’s climb during the first half of December.

If you’ve been following me, you’re not surprised. I’ve pointed out to you before that futures traders had recently taken their most bearish stance on silver ever.

The “silver lining” is that extreme levels typically precede major rallies for silver prices. From similarly bearish lows three times going back to 1997, silver has put on major rallies. And we could well be nearing just such a point right now…

How the Price of Silver Is Trending This Week

Last week, the silver price struggled against the dollar, which had two distinct bouts of strength.

Life-Changing Profit Potential: One tiny firm is rapidly developing the parts for a game-changing technology – and the gains from its stock, trading for less than $10, could turn every $1,000 invested into $4,719. Learn more…

On Wednesday, the DXY sold off as investors returned to stocks with the S&P 500 soaring about 2.3% from Tuesday’s low before ending down on the day. Silver rallied to close at $14.73.

Stocks were less volatile on Thursday, but still had a negative bias, which helped the DXY regain some ground, peaking at 97.27 at mid-morning, then settling back to 97.10 by 5 p.m.  Despite the dollar’s relative strength, silver maintained the previous day’s strength.

Here’s the DXY’s action over the past five trading days: 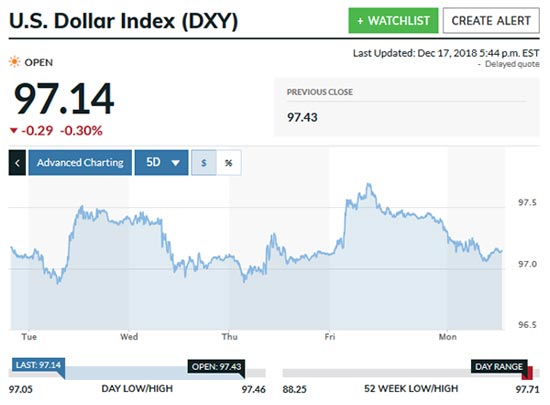 And here’s a look at stock index volatility for the last five trading days: 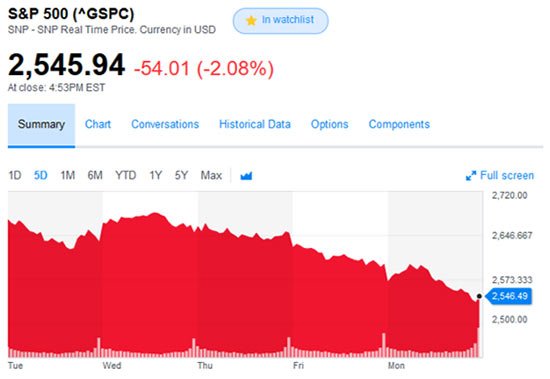 As you can see, Friday’s stock market action extended losses from the previous few days.  Worries about slowing economic growth were seen as the main culprit. And that got traders buying the dollar once again, pushing the DXY to 97.7 intraday before settling back to the 97.40 range. Silver sold down to $14.53.

Then on Monday, renewed dollar weakness, even as the Fed rate decision approached, was accompanied by more selling in stocks. By day’s end, the DXY was at 97.13, and the price of silver had regained to close at $14.64.

What’s Next for the Price of Silver as 2018 Ends

Action in the chart of the U.S. dollar index shows a rally that’s likely losing steam. 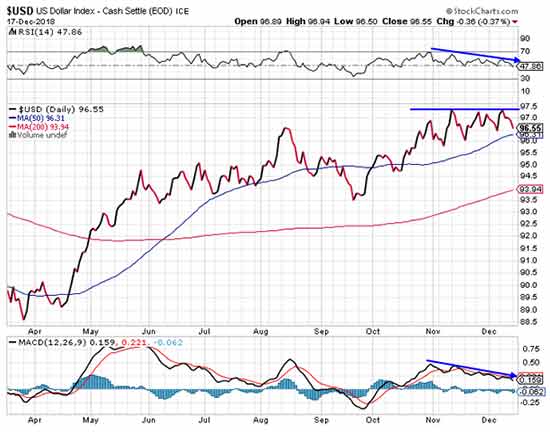 While the DXY has tried to break above it, overhead resistance at 97.5 has proved too much on at least three occasions in the past month.

And looking at the relative strength index and moving average convergence divergence momentum indicators, we see both on clear downtrends. This suggests the next major move for the dollar could be lower, and this week’s Fed rate decision could just be the trigger.

As for silver, the action is muted but remains encouraging. 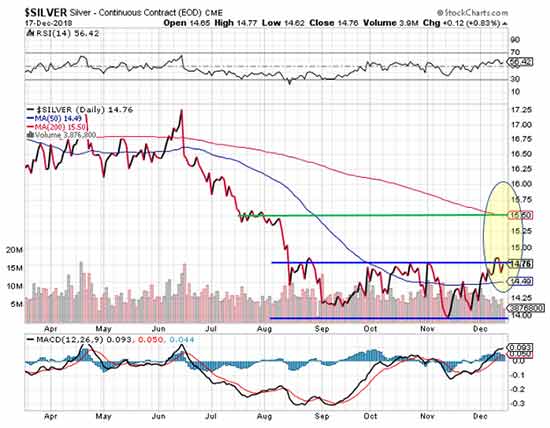 Though silver meanders within the same range of $14 to $14.75, it has spent most of the last two weeks above its 50-day moving average, around $14.50. What’s more, it has continued to set a series of higher lows since mid-November.

Breaking through $14.75 remains crucial to a new rally, now that $14.50 looks to have been overcome. And $15.50 continues to look like the next most likely technical price target.

I think the Fed will not surprise, and will raise rates this week. Near-term, that could mean just about anything.

But I expect that within a couple of days, the dollar index will begin a new downtrend as traders sell the news.

And that’s likely to help kick off a generous rally in silver. That’s what we’ve seen in the last three December Fed rate hikes since 2015.

But with silver so deeply oversold, a rally could force the hands of speculators who are still near an extreme bearish position in silver futures.

Big buying by speculators to cover their short positions could fuel even more upside, potentially leading to a violent mean reversion over the next couple of months.

This IRS Directive Could Mean Billions Are Now in Play

Everyday folks from across the country are taking advantage of an obscure IRS directive to collect what we call “Federal Rent Checks.”

And by implementing a simple investment strategy, you can collect them each and every month. At this moment, Americans are adding their names to the distribution list – and you can too.