There’s no question the price of silver has made some bullish moves this week.

The silver price has climbed by 3% over that time, aided by a weak U.S. dollar and markets, both of which have also been suffering from growing volatility.

Meanwhile, the S&P 500 has given back a stunning 5.7% in the last week and is actually in the red on a year-to-date basis.

Some currency experts think the dollar might struggle next year, as the U.S. faces a possible economic slowing. That could prompt the Fed to pause its rate hiking sooner than expected, making the dollar relatively less attractive.

Even so, silver’s recent behavior in the face of a rising dollar has been stellar. Read on for my analysis of just how well silver prices have held up against the greenback.

How the Price of Silver Is Trending Now

Although silver started out last Tuesday (Dec. 4) with an impressive rally, it was mostly thanks to a temporary bout of dollar weakness.

The dollar managed to bounce back, with the DXY hovering around 97.10 most of Wednesday, then backpedaled to consolidate near 96.8 most of Thursday. Silver had weakened into early Thursday, when the DXY finally stabilized, and silver bottomed that morning at $14.36.

Must See: This method may be the only way in history to turn a small sum of money into $100,000 without batting an eye. Read more… 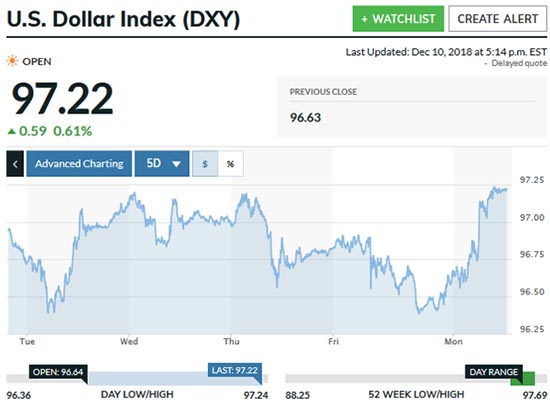 As the DXY’s sell-off bled into Friday, silver prices enjoyed more strength, rallying to end the week at $14.58.

Then on Monday, the markets managed a strong reversal after early selling, with the S&P 500 closing higher than Friday’s close. That was accompanied by new dollar strength, pushing the DXY up to 97.2 by day’s end. That weighed on silver, which backed off from Friday’s levels to close at $14.50. 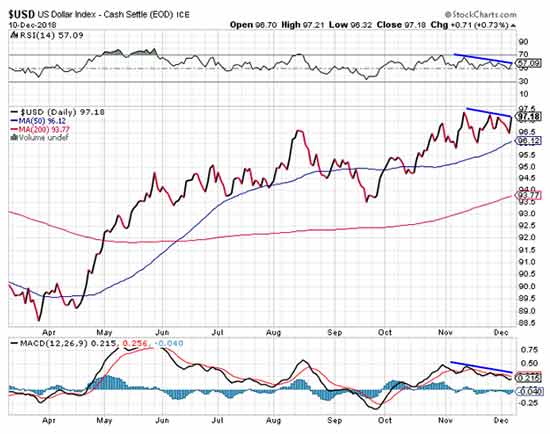 The trend I highlighted for you last week has remained in place. The relative strength index (RSI) and moving average convergence divergence (MACD) momentum indicators continue to trend downward, and the DXY itself has done the same.

This is particularly interesting, given that the Fed is widely expected to announce a rate hike next week. Either the market is starting to realize that was already priced in, or it’s starting to doubt the likeliness of a hike for December.

Silver has typically rallied at the last several hikes, and in particular at the last three December hikes in 2015, 2016, and 2017. I’m expecting the same this time around. But if the Fed blinks and doesn’t hike rates, all bets are off. I think silver would soar, as the dollar would likely get crushed.

Now let’s look at silver itself. 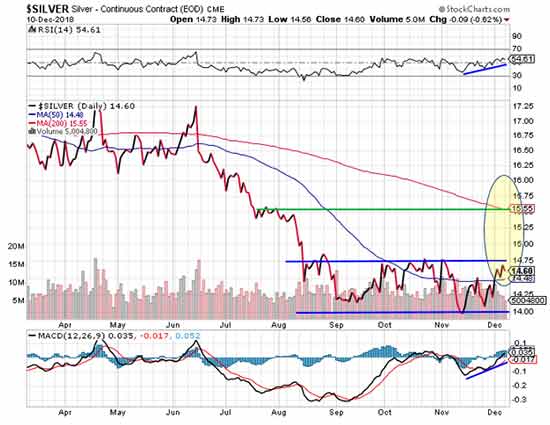 While silver still remains within its trading range of $14 to $14.75, it’s been above its 50-day moving average lately and approaches overhead resistance.

Silver’s RSI and MACD have both been trending higher for the past month or so, while silver has managed to establish a series of higher lows.

Like I said earlier, I’m really impressed with how silver has behaved in the face of a robust dollar index.

Consider that the DXY’s last high occurred on Nov. 12, reaching 97.54. On that day, silver weakened to close at $13.98. Since then, the DXY has of course bounced around quite a bit. But on Monday, the spot DXY was at 97.21 by 5 p.m., and yet silver had risen to $14.50. That’s a considerable gain for overall modest weakness in the dollar, suggesting that silver may finally be gaining some traction to rally higher.

I think investment demand for silver will start to become a bigger driver of the metal’s price.  And I expect renewed market volatility, and a greater recognition that we’re nearing the end of the current economic expansion, will make silver increasingly attractive to investors.

This Company Just Checked All of Our “Profit Potential” Boxes

This tiny $10 company is at the center of the tech revolution. It’s holding the keys to a product that could soon be used around the globe, and it just recently inked four major deals with HUGE players in its field. That means early investors could start reaping huge fortunes – not years from now – but in the months, weeks, or even days ahead. Read more…