A week after the midterm elections, we’re starting to see crypto play a larger role in political campaigns.

These charts illustrate this in two ways. Clovr, a blockchain research firm, asked 1,000-plus eligible U.S. voters various questions about cryptocurrency and its place in politics. The survey yielded two particularly interesting results:

That sounds… about right.

Crypto campaign contributions aren’t without precedent. The Center for Public Integrity found 20 candidates (of various political parties) have been requesting or have received crypto donations.

In 2014, the Federal Election Commission concluded that bitcoins are “money or anything of value” within the meaning of the FEC Campaign Act of 1971. But since crypto is still missing clear and robust regulations, crypto donations are subject to a maze of different policies at the state level.

Andrew Hemingway, who ran for governor of New Hampshire in 2014, was the first to accept bitcoin contributions. Austin Petersen, who lost a Senate primary race in Missouri this year, accepted the largest single bitcoin donation in federal election history… but was forced to return several massive crypto contributions because of campaign finance regulations. 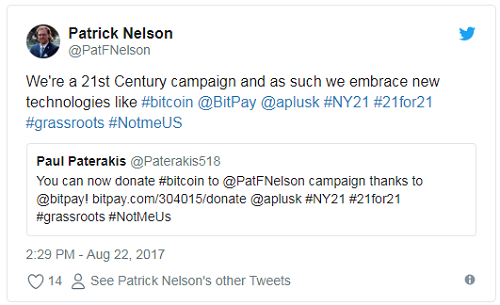 Bitcoin, and crypto in general, is slowly gaining mainstream acceptance, so it makes sense for political candidates to keep up with the times.

But these are politicians we’re talking about. And for many voters, distrust runs deep.

Voters who are bullish on crypto do have some some support in Congress, though. The bipartisan Congressional Blockchain Caucus, which was founded in 2017, is seeing growth. All four caucus co-chairs were reelected last week: Jared Polis (newly elected governor of Colorado), David Schweikert (R-AZ), Bill Foster (D-IL) and Tom Emmer (R-MN).

The caucus is primarily interested in how blockchain can improve government services, data ownership and healthcare. Even better, the group’s regulatory approach sounds like it leaves room for growth:

As a Caucus, we have decided on a hands-off regulatory approach, believing that this technology will best evolve the same way the internet did; on its own…

We are in the early days of this technology, and we feel it paramount that Congress be a bridge between industry and government to foster collaboration and ensure competitiveness on the global stage.

It’s still early, and the government can be a slow-moving machine. But change is coming… one vote at a time.

The post Distrusting Candidates (but Not Crypto) appeared first on Early Investing.