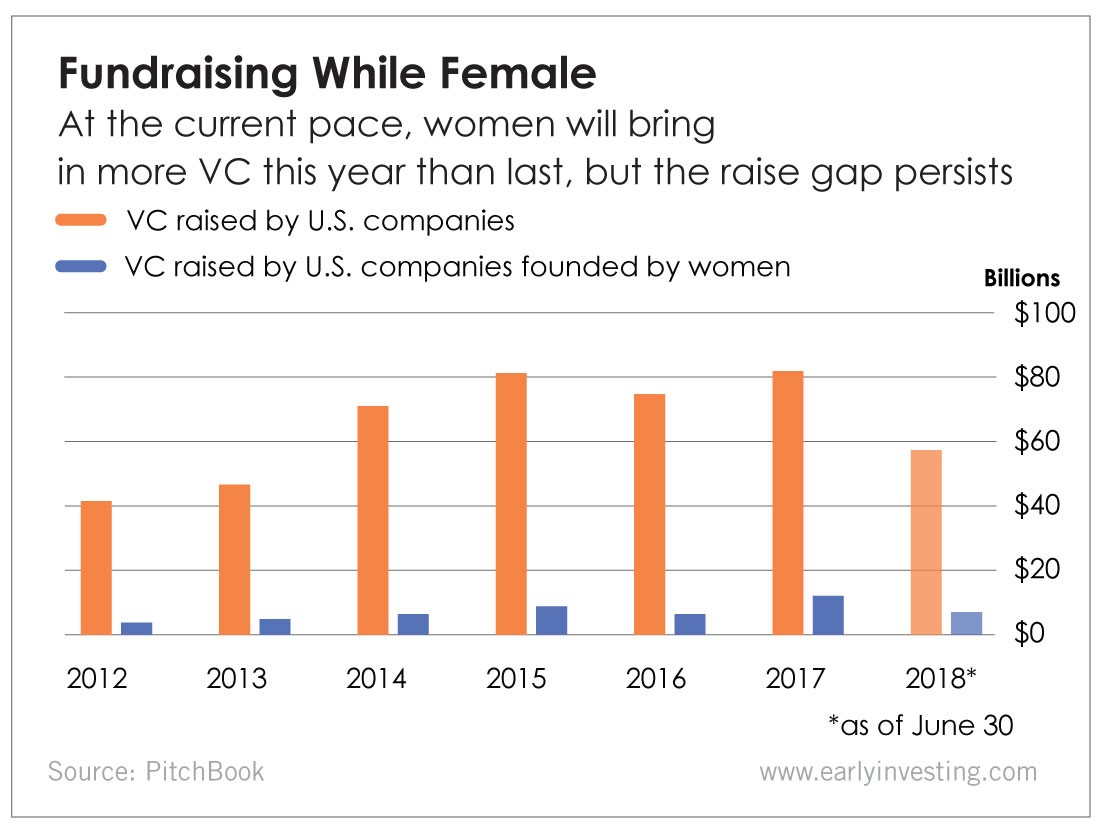 You’ve probably heard of the gender pay gap. It’s the difference between what men and women get paid for doing the same work. In 2017, the median annual earnings for American men working full-time jobs was $52,146. For women, that number was just $41,977.

The gender gap extends to venture capital fundraising as well.

Today’s chart comes from PitchBook. According to its data, American companies with at least one female founder have raised $7.2 billion in the first six months of this year. That’s about 12.5% of all venture capital collected so far in 2018.

At this pace, women founders will bring in more venture capital in 2018 than they did last year. But the enormous investment gap persists.

Last year, American companies started by women raised $12.3 billion, which is 15% of the $81.9 billion raised by all U.S.-based companies. That number, though, includes companies with both female and male founders. In 2017, just 2.2% of all venture capital in the U.S. went to companies founded solely by women.

The good news is that equity crowdfunding is helping to level the playing field.

Through crowdfunding, startups can bypass the venture capital gatekeepers to access the general population. Minimum investments on portals can range from as little as $10 to as much as $1,000, with plenty of price points in between. So investors can get in without breaking the bank, and startups can reach bigger pools of investors.

Crowdfunding also provides startups with a massive organic marketing opportunity. Through crowdfunding campaigns, startups can convert customers and investors into brand ambassadors who then spread the word about the company. Since investors have skin in the game and faith in the company, they’re going to want to help it succeed any way they can.

Kendrick Nguyen, CEO of Republic, has explained his portal’s focus on diversity:

The saying “talent is equally distributed but opportunity is not” may be true  - but that can change. Innovations are gender neutral, and good businesses exist in all parts of our country.

Financing sources, too, should be equally distributed.

Capital is gender-blind. So equity crowdfunding is democratizing access to it. Venture capitalists, take note.

The post Crowdfunding Is Shrinking the Gender Gap appeared first on Early Investing.