We’ve finally said goodbye to 2018. Now is a great time for the crypto industry to get reacquainted with one of its core missions…

Big banks have been in the crosshairs of crypto believers and entrepreneurs since Satoshi Nakamoto issued his white paper that launched bitcoin a decade ago. And not one bank has been replaced with a crypto rival.

You can bet that if I’m asking these questions, so are banks.

Their reactions to crypto have been all over the place. I thought there was no pattern, until I thought of the five stages of grief.

It makes sense. The banks are facing a possible existential threat.

Their first reaction naturally would be denial. It would explain Jamie Dimon’s statements… from “Bitcoin is a fraud” to “If you’re stupid enough to buy it, you’ll pay the price for it one day.” Dimon, the CEO of JPMorgan Chase, is just one of many bank CEOs who have dismissed bitcoin.

Next comes anger. Late last year, Dimon said, “I don’t really give a s*** about bitcoin – that’s the point, okay?” And the usually calm and wise Warren Buffett, a big investor in Bank of America and Wells Fargo, said last year that bitcoin was “probably rat poison squared.” That’s neither clever nor insightful. That accusation was made in anger.

The fourth stage is depression, or in this case, a begrudging resignation that blockchain and fintech companies aren’t going away. That’s the stage banks are in right now.

For example, in a recent poll of 600 prominent banking executives in the U.K., 59% of them believe fintech companies pose serious to massive threats to the banking industry. Seventy-nine percent believe fintech companies have “more engaging brands.” And they think a majority of banking customers will be using some nontraditional fintech services in five years’ time. In 10 years, they expect 70% of customers to be using some services offered by non-legacy banking firms. 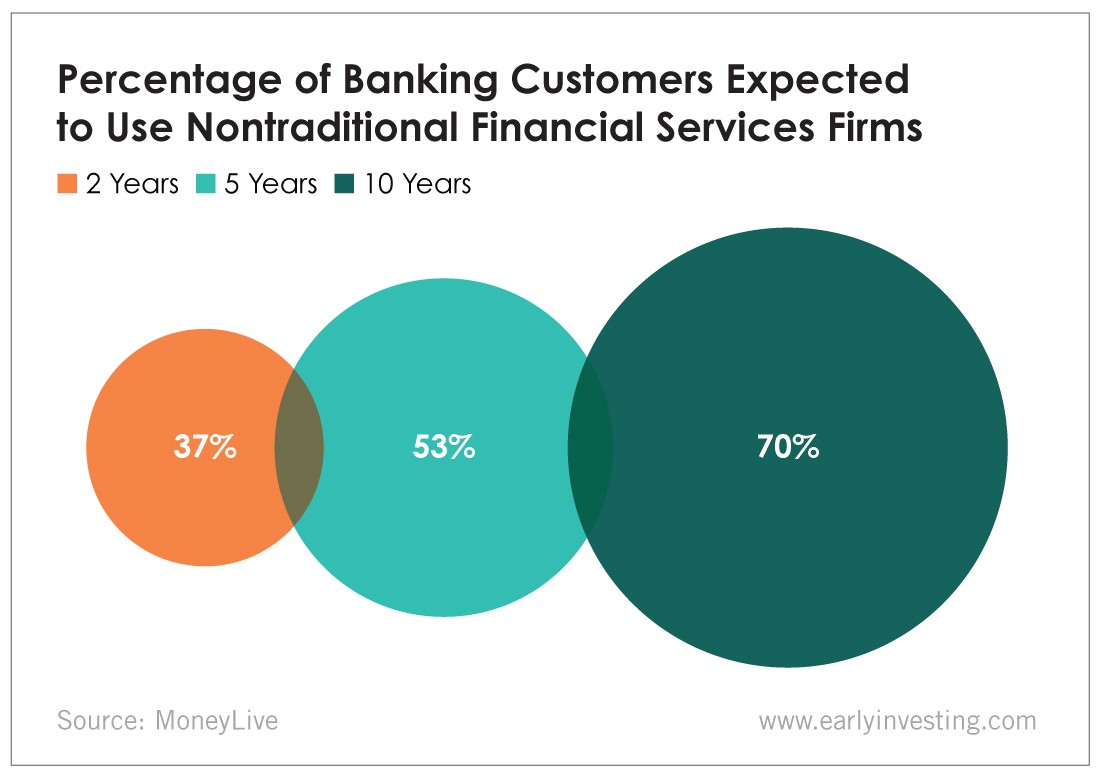 The last stage, acceptance, is when the banks have no choice but to realize they’re on the losing end of a battle against faster, safer, cheaper technologies. Banks are inching toward that stage.

And as they do, it looks like they’re following IBM’s playbook.

IBM made huge mainframes… then powerful servers… only to pivot into IT consulting for Fortune 500 companies. And now it’s one of the biggest players providing blockchain-backed services in supply chain, transportation and other business areas.

IBM’s pivot was aggressive, forward-looking and brilliant. I’m not sure it would have survived undergoing a less ambitious reinvention.

Bank of America could be preparing for an IBM-like revamp. It has filed more than 50 blockchain-related patents (as of August 2018), according to IPRdaily.

Its latest is a patent that would enable the bank to operate an “ATM as a Service,” which would “accelerate transaction speed and/or facilitate other types of transactions in addition to ATM transactions like cash withdrawals and deposits, such as gift registry transactions.”

JPMorgan has big plans for its Quorum technology, including tokening gold bars. Seven of Europe’s biggest banks are partnering with IBM to build a platform for small businesses to finance their cross-border orders in the region.

While banks seem to be in “if you can’t beat them, join them” mode, I’m still seeing some denial. If the banks go all-in deploying trustless blockchain technology, they will have to drastically reduce staff – my back-of-the-envelope estimate is by 50% at least – and cut back services they charge fees for.

This is the IBM-like pivot banks have to make. The banks think they can finesse it. I don’t. “All-in” isn’t a viable solution. So how about picking and choosing? Can a company run half its operations based on mid-20th century technology and half on 21st century technology? This isn’t viable either.

Legacy banks are caught between a rock and a hard place. They’re big, slow and reliant on outdated technology. The Bitwalas (Germany’s first crypto bank) and Founders Banks (Malta’s pending decentralized bank) of the world are coming after them with guns blazing.

Satoshi Nakamoto’s vision is on track. Whether they know it or not, banks are about to become an endangered species.

The post Banks Are in the Depression Stage of Grief appeared first on Early Investing.