“Zombie” stocks are proliferating – and one or more could be lurking in your portfolio.

These stocks to sell are companies trapped by their own debt. In short, their profits aren’t enough to cover their debt interest payments. And in a rising interest rate environment like the one we’re in now, the zombification will keep getting worse.

According to the Bank of International Settlements, the number of these dead firms walking is on the rise.

A BIS report released in September said the prevalence of zombie stocks in 14 advanced economies had zoomed from about 2% in the 1980s to about 12% by 2016. In the United States, the number of zombie firms doubled between 2007 and 2015, to about 10% of all publicly traded companies.

Another red flag is the declining quality of corporate debt. The number of advanced-economy companies with investment-grade debt has dropped by half since 2000. Zombie companies are a major contributing factor to this disturbing statistic.

The problem now is that a one-two punch – a slowing economy combined with higher interest rates – could push many of these companies toward default.

This is a problem that’s been building for years…

Where Zombie Stocks Come From

The seeds of this looming “zombie apocalypse” were sown in the financial crisis of 2008. That’s when central banks began reducing rates to historic lows.

The allure of cheap money was too much for many companies to resist, even those with already-shaky balance sheets. And as long as rates remained low, the interest payments on all that debt was manageable. 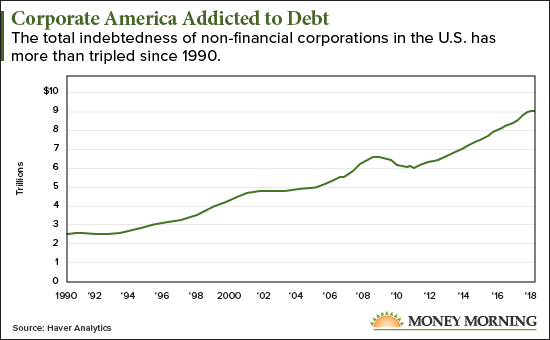 Now that rates are rising, the zombies are about to be exposed. According to UBS research, economy-wide interest payments will increase by 7 to 8% this year – requiring an equivalent increase in income to cover added expense.

Zombie companies are always bad for an economy – they draw capital and resources into unproductive firms that would generate better returns if invested in healthier companies.

But if they start to fail, zombies can inflict even more damage. The failure of zombie firms that owe large amounts of money creates a systemic risk that will create havoc as both investors and creditors get slammed with massive losses.

Clearly, investors want to avoid buying any zombie stocks. But the BIS report didn’t name names, it only listed the criteria it used. Companies that fit the definition of “zombie” were those that were at least 10 years old while being unable to cover their debt payments with their profits (a debt coverage ratio of less than 1.00).

At Money Morning, we realize investors need actionable information. So we did a deep dive using the same basic criteria as the BIS and uncovered nine familiar stocks that could very well be lurking in your portfolio. We also found some “near-zombies” that are just as risky.

You may be aware of the struggles of some of these firms. But several will surprise you. And if you own any of these stocks to sell… you’re going to want to know about it sooner rather than later.

9 Stocks to Sell Before They Devour Your Money

One caveat about zombie companies is that many of them incurred large amounts of debt as part of a strategy to grow the business. Examples include major acquisitions or purchasing more efficient equipment or systems. As long as the gamble paid off, the new growth would generate the profits needed to pay the debt.

The low interest rates of the past decade encouraged a lot of companies to take these risks.

Even many of the companies on this list could shed the zombie label if they can generate enough growth. But because they’re so leveraged, they have very little room for error.

I’ve also included the Moody’s credit rating for each company’s debt. Any rating below “A” represents at least moderate risk.

Here are some of the better-known zombies…

Autodesk is a well-regarded developer of computer-aided design software (that architects use). It’s gotten into trouble trying to transition to a subscription model, which has resulted in reduced sales and stagnant growth. In the long run, the subscription model will deliver higher margins and more profits, but it needs several years to get there.

Although Campbell has a ratio higher than the BIS cutoff, I included it because it is heading strongly toward zombie territory. CPB’s ratio has dropped 80% since January, from a healthy 12.36 to 2.401. Campbell took on debt to buy snack food maker Snyder’s Lance for $6.1 billion earlier this year. But Campbell has been losing market share to healthier brands, and has become a target of activist investor Dan Loeb. This iconic American brand is, if you’ll forgive the expression, in the soup.

The popular rental car company has seen its fortunes fall over the past decade as it failed to keep up with new technology in its industry. Trying to play catch-up, Hertz has been investing in itself but going deep into debt in the process. But with stiff competition, weak margins, and rising interest rates, the turnaround Hertz is attempting faces a steep uphill road.

An American household name for decades, missteps over the past decade that alienated customers have put this retailer’s future in jeopardy. The slow death of the shopping mall as shoppers turn to online options like Amazon.com Inc. (NASDAQ: AMZN) and crippling debt has left JC Penney little margin for error. Even worse – management doesn’t seem to have a plan to return to profitability.

The company behind such beloved brands as Hot Wheels, Barbie, Fisher-Price, and American Girl has struggled to turn a profit in recent years. Revenue has fallen three years straight. And this will be Mattel’s first holiday season in the wake of the demise of Toys R Us, which is sure to ding profits this quarter. The company is restructuring to stop the bleeding, but a long string of unprofitable quarters with its high debt load could make things uncomfortable.

Disruption has taken its toll on cosmetics giant Revlon, as online competitors and specialty beauty stores have eaten away at market share. Revlon’s debt isn’t extraordinarily high, but quarterly losses have left it short of the cash it needs. The remedy of choice is cost-cutting and a shift to more profitable products. Granted, the firm’s most recent earnings were positive, but REV can’t afford any backsliding.

Beset by growing competition from larger rivals and powerful newcomers like Amazon as well as a hangover from ill-fated merger deals, Rite Aid is in a hole it may not be able to climb out of. Having sold off many of its stores, the drug store chain is losing money and lacks the cash it needs to service its debt. Unless it finds a buyer or somehow re-invents itself, Rite Aid may be headed toward bankruptcy.

Some may be surprised to see Tesla on this list, as it has long been a Wall Street darling. But auto manufacturing is a very capital-intensive business (which is why you rarely see new auto companies). The company has great technology, but continues to bleed cash and has struggled to meet production goals. And making more cars is critical for the company to reach profitability. If Tesla can ramp up production and sell just about every vehicle it builds, it has a chance to outrun the debt monster that’s chasing it. But unless a lot of things go right, this promising company faces some very dark days.

Teva, one of Israel’s biggest companies, took on debt to acquire Allergan’s generic drug business, Actavis, for $40.5 billion in 2016. On top of that, falling prices for generic drugs have hit Teva hard. The world’s largest maker of generic drugs has tried to boost profits through cost-cutting with some success, but it needs generic drug prices to remain stable. In September, the FDA approved Teva’s migraine drug Ajovy. If it’s successful – and if Teva doesn’t suffer any more problems – Ajovy could help heal the company’s balance sheet.

And for good reason – since the start of the year, the market has made virtually ZERO gains.

But he’s uncovered a new way to collect thousands of dollars each week – without having to deal with a single disappointing stock ever again.

The only way you’re going to get the chance to learn how to make enormous profits outside the world of stock investing is by clicking here now.